Using NOT IN is fraught with problems because of the way SQL handles NULLs. As a general rule, do not use NOT IN unless you are certain that the result set will not include a NULL.

Let’s see an example below. In this example, we want to query all department records from departments table except these four  10, 20, 30 and 40. And it works just fine. But if you add a NULL to this condition, you won’t get any results at all despite that departments table does not contain a NULL value either It looks a little strange, and this is why I dedicated a whole post about it. But this is how SQL handles NULL. You just need to remember it and avoid using NOT IN and NULL together.

At the same time, IN and NULL works, but NULL values are not returned As we can see all departments from the IN list were shown, except the NULL department 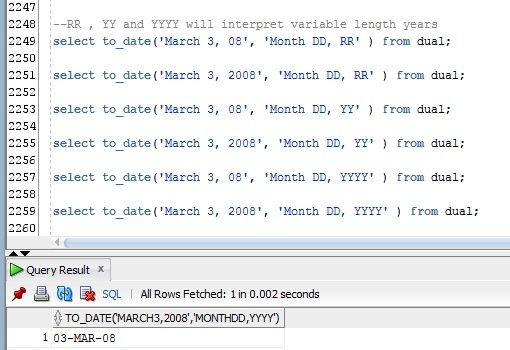 RR, YY and YYYY masks will interpret variable length years, means you can specify both two-digit or four-digit format as shown […]

SQL is a strongly typed language: columns are defined as a certain data type, and an attempt to enter a value of […]

NULL is not determinate value and is not counted when the COUNT function is used with the DISTINCT keyword For instance, if […]

The COALESCE function returns any datatype such as a string, numeric, date, etc. (BUT all expressions must be the same datatype in […]